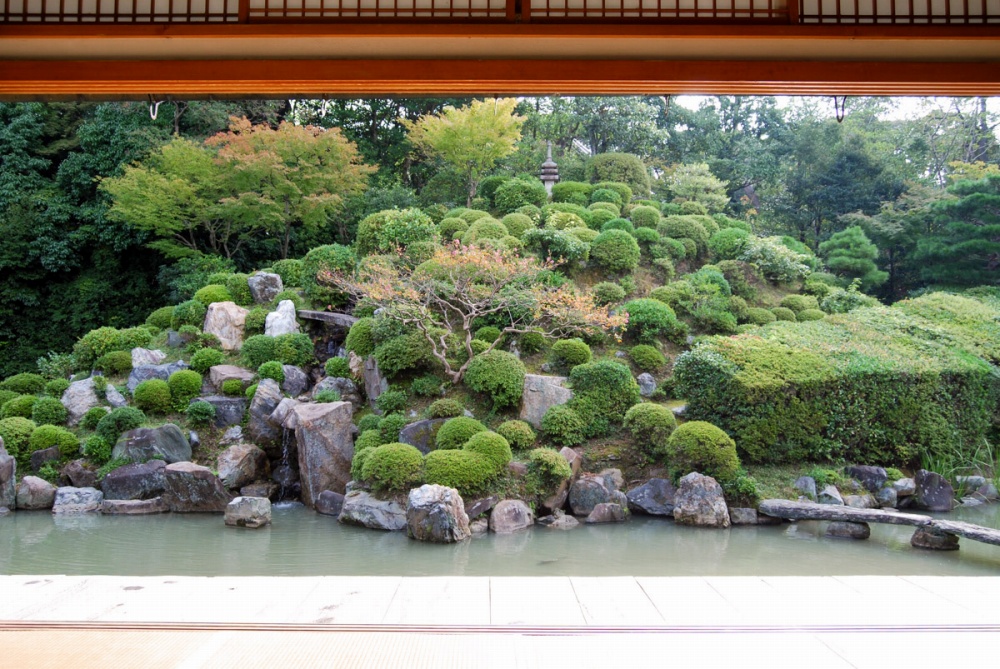 Chishakuin Temple Garden is said to have been created in 1674 and was praised as the best garden in Higashiyama area at the time of its creation. Much later in 1945, it was designated as a Place of Scenic Beauty. Its characteristic feature is the “Tsukiyama” (築山), a miniature artificial hill surrounded by a pond.

Not only Chishakuin but all Japanese gardens are made of mostly natural materials therefore deterioration and damage over time are inevtiable. The restoration of Chihshakuin is based on the aspects it was designated a Place of Scenic Beauty for. A garden drawing from the Edo period published in 1799 (‘Miyako Rinsen Meisho-zue’) is one critical reference, to restore the garden original scenery. 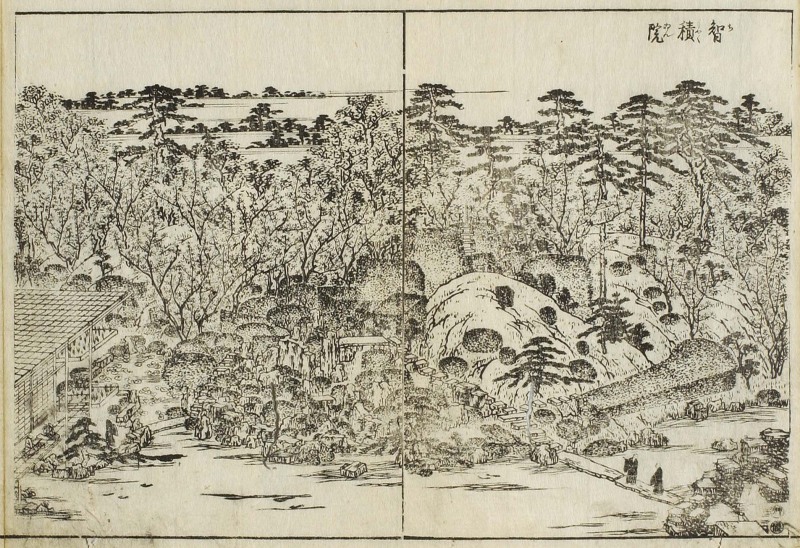 The Japanese ‘Cultural Properties Protection Law’ states that if the current state of a Place of Scenic Beauty has to be altered or any work with impact on its preservation is conducted, a permission from the Agency of Cultural Affairs is required. The main principle is to return all to its exact original state even if only one stone is moved for repair. Prior survey has been conducted to select which part of a stone require restoration, upon which appropriate methods were chosen.

During the survey, the structure of the Tsukiyama and its layers have been revealed, which provides significant source to understand the original vision of the garden design. Survey validation and accurate recording were therefore critical.

Preliminary, field experts and engineers specialized in cultural property protection have been studying the site to search for the most appropriate restoration methods. 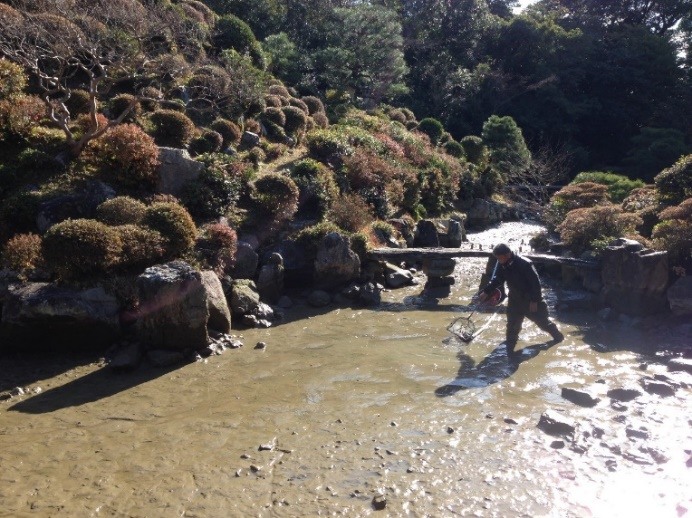 To commence the pond wall restoration, the water in the pond had been drained. 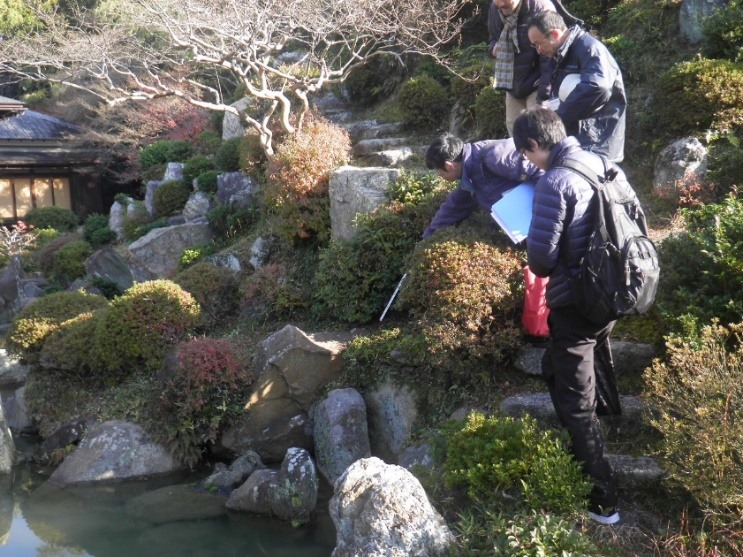 The position of stones and other objects were recorded to later insure their original position. 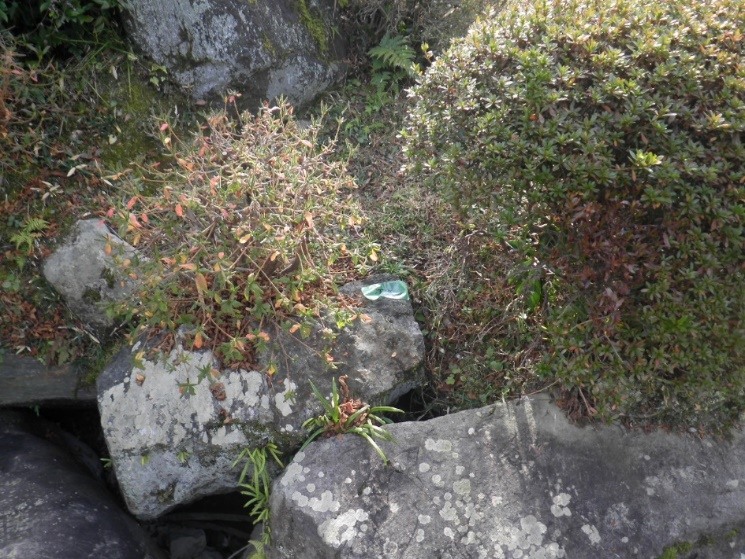 The edge of the pond wall (Before) 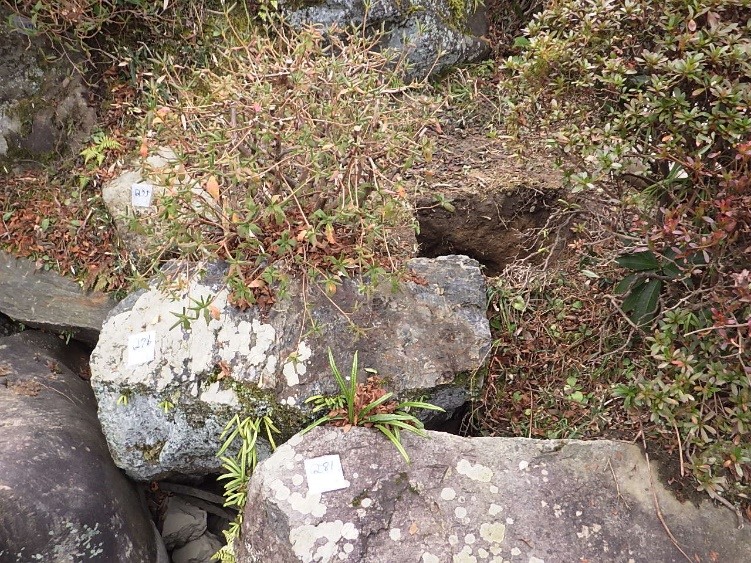 The edge of the pond wall (After) 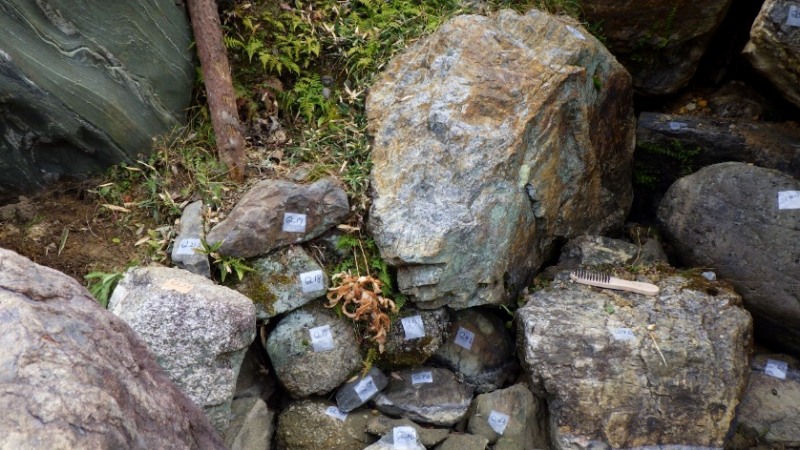 All stones are numbered and photographed. 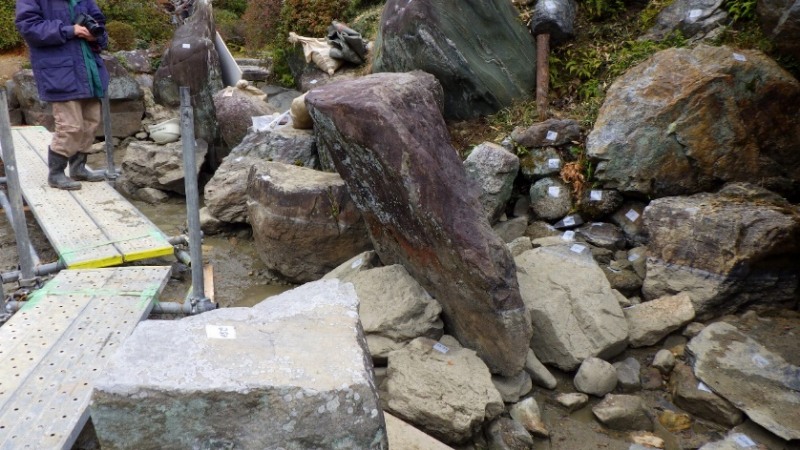 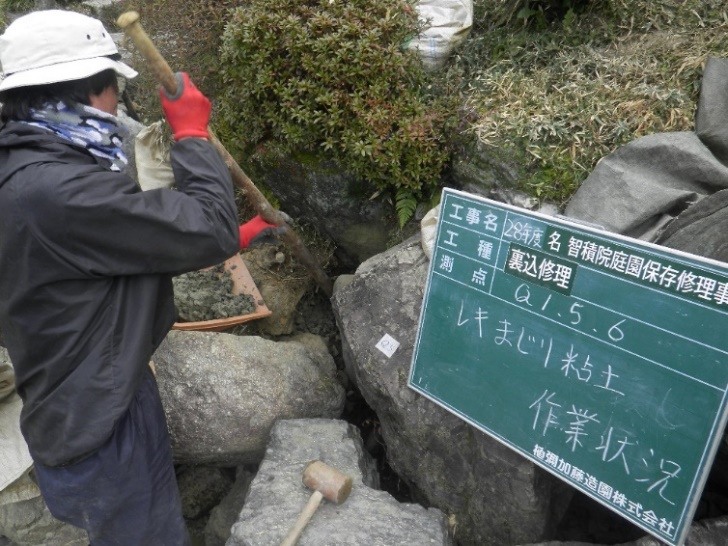 The position of stones as well as the site condition and work process were recorded. 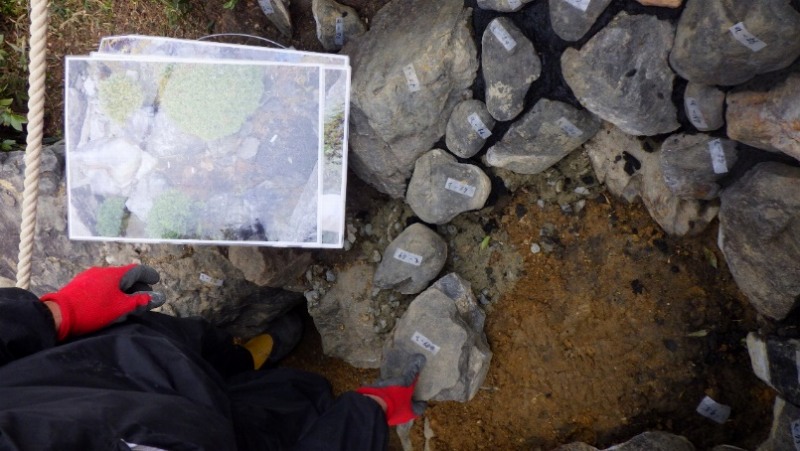 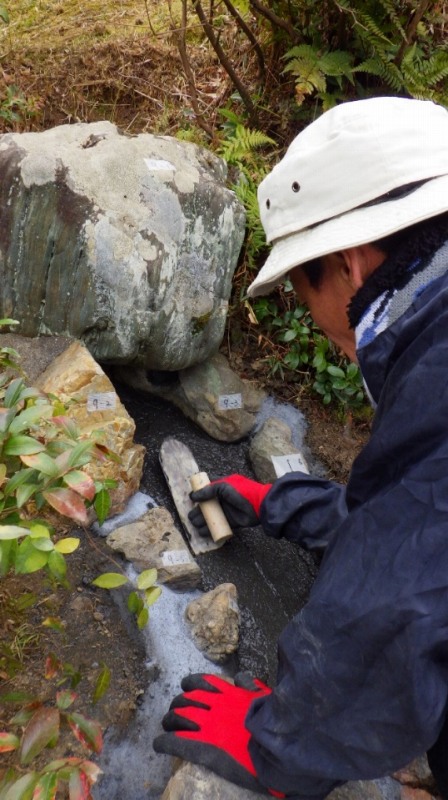 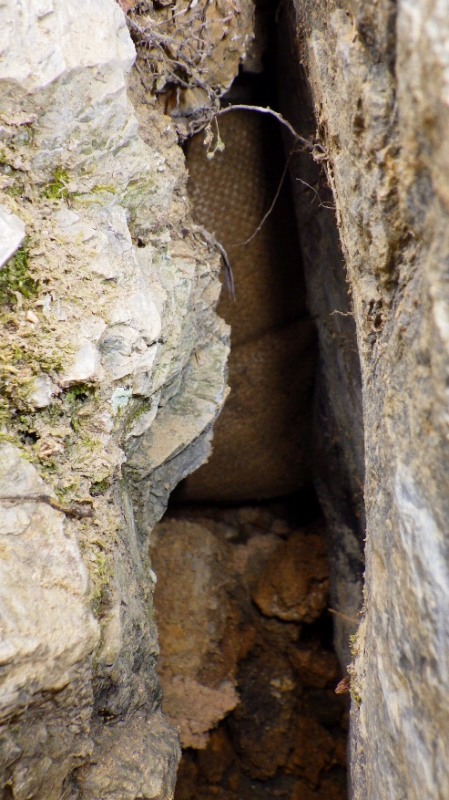 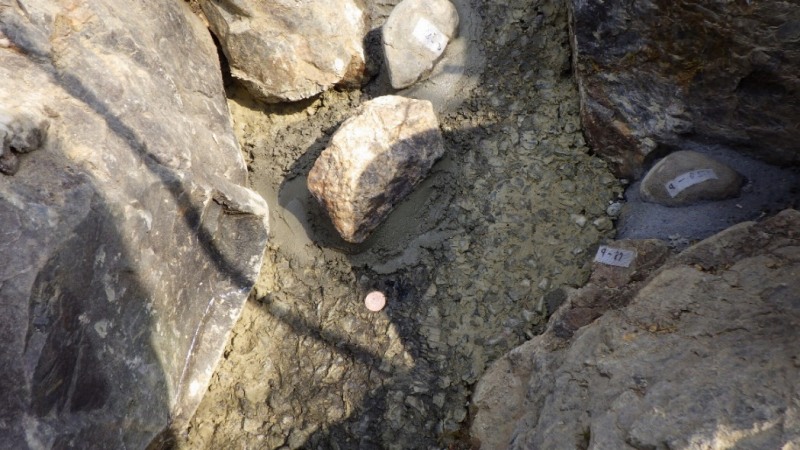 Unique to restoration works, a coin that was issued in the very year is buried underneath a stone, to enable reference for future restoration. 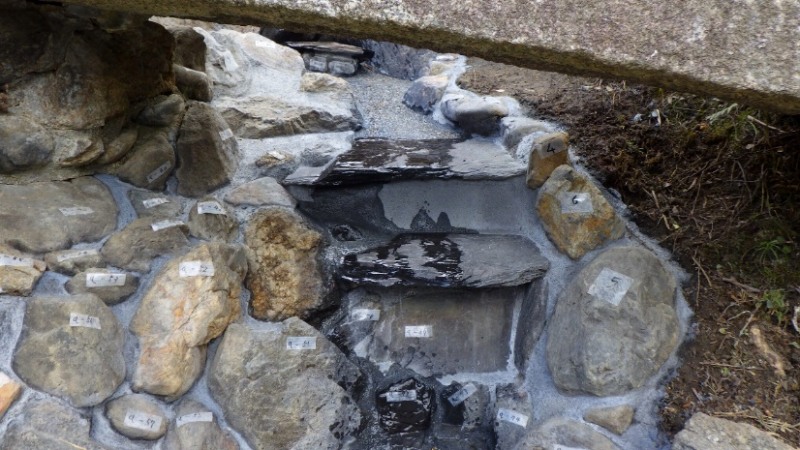 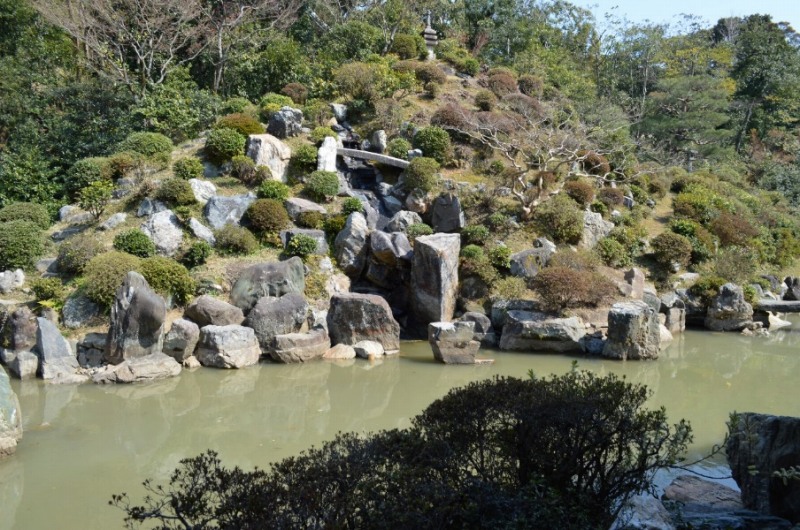 Restorative pruning is conducted to revive the original scenery of the garden. Overgrown trees in the mountain behind the garden had become more visible than ones in the garden itself or cast too much shadow. Old records such as literature of the Edo period and old photographs from later Meiji era are referred to in order to decide the pruning of overgrown trees. Hence the original garden scenery can be sustained. 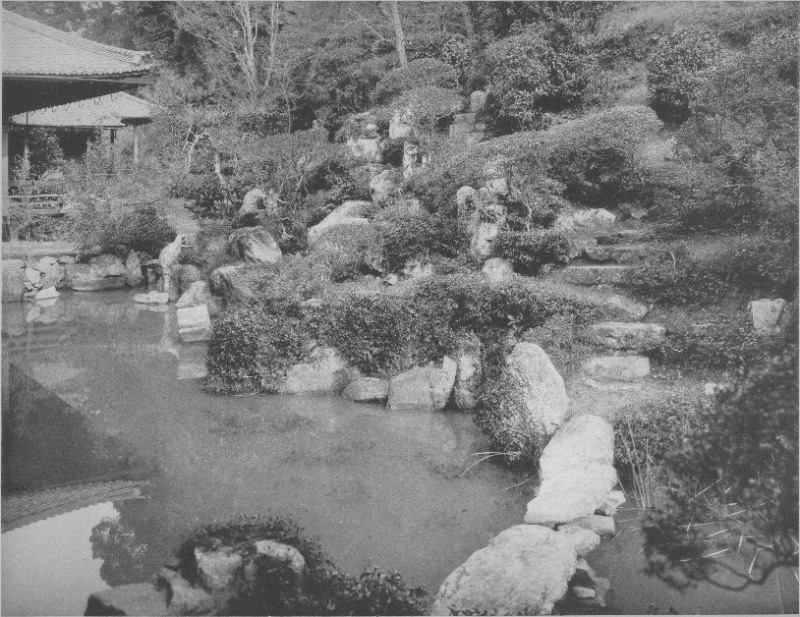 An overgrown tree in the mountain behind the garden (Gigantic Castanopsis) casted shadow on the garden and negatively impacted the flora of the garden. With reference to the drawing of the Edo period (Miyako Rinsen Meisho-zue, 1799) which does not show a larger tree in the back, it was decided to cut down the tree. 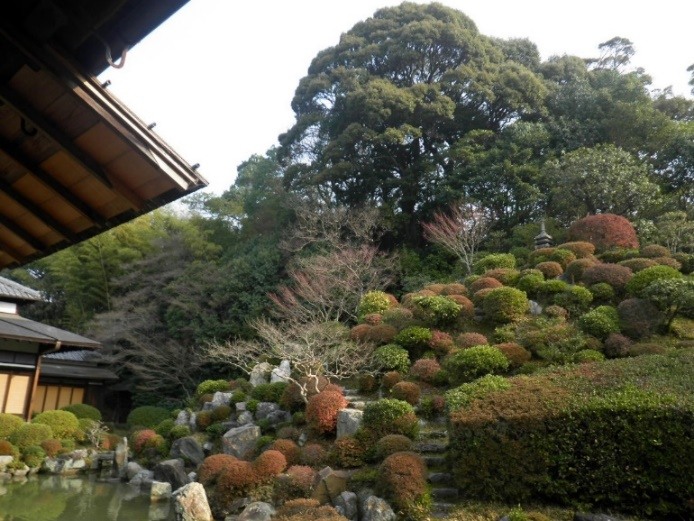 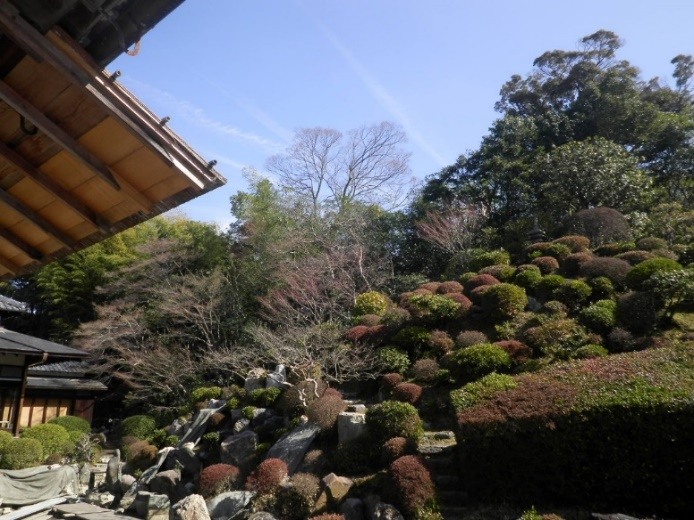 A large tree (as seen on the picture) either can be trimmed to the extent that its core sceleton will have to regrow or only its branches can be cut. During the restoration process both trimming and pruning are taken into consideration. When felling a large tree, first the footing is secured. To insure a safe process, trimming starts from the tip of the branches, then approaching the roots. 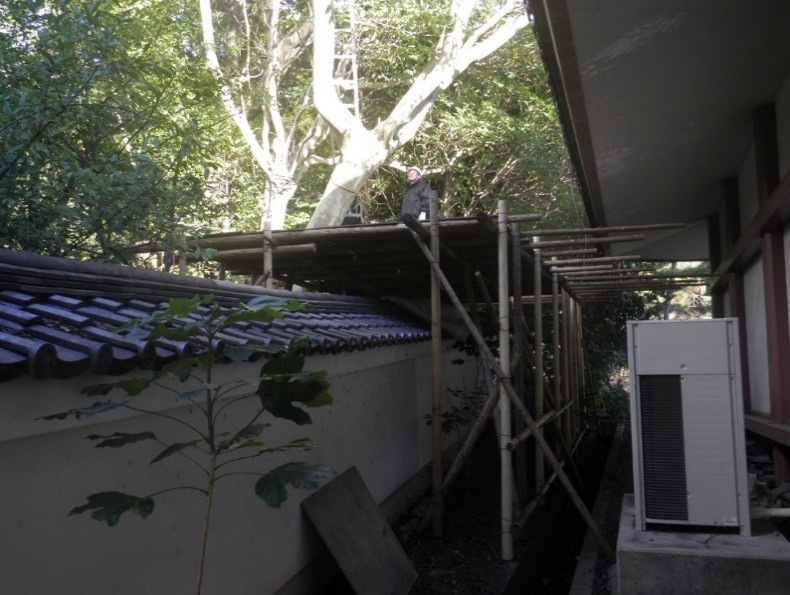 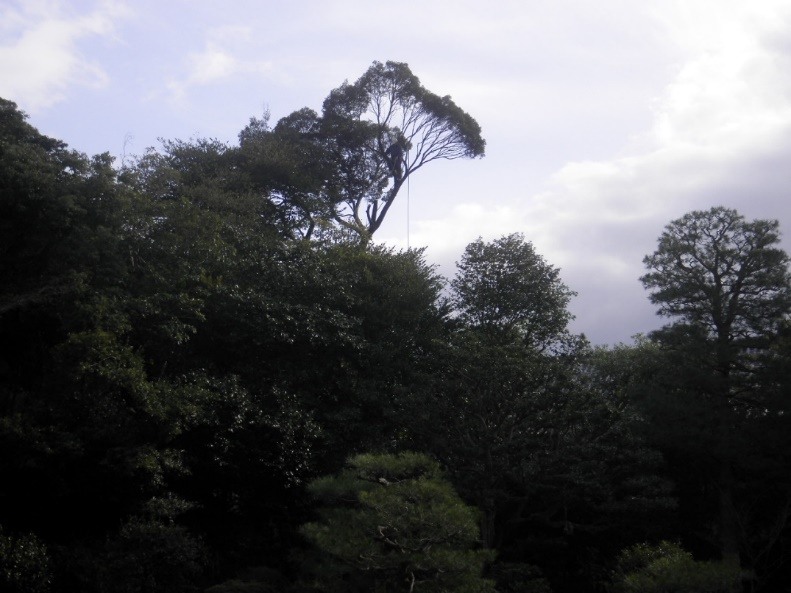 he tree deemed unfit as well as too visible tree parts are trimmed to ideal size. As big machinery cannot be brought in, the size of the cut parts should be small enough to be taken down by hand and remove from the site. 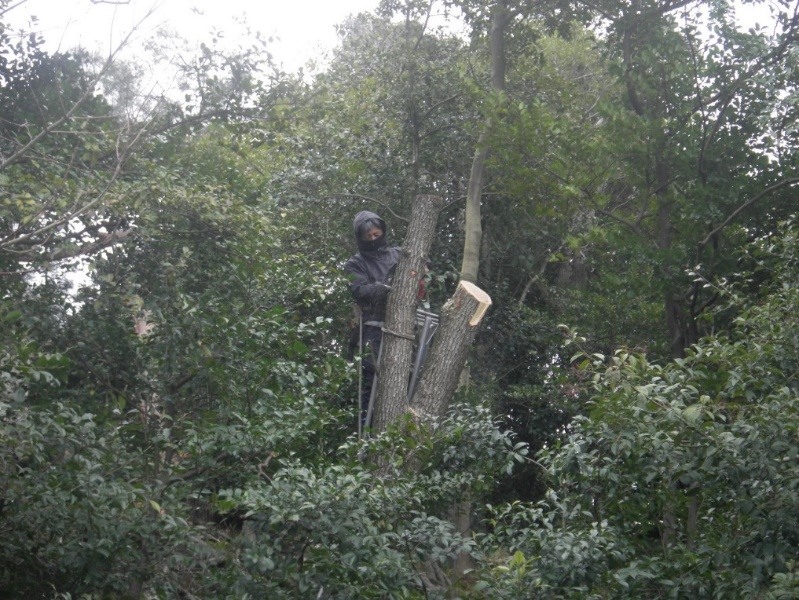 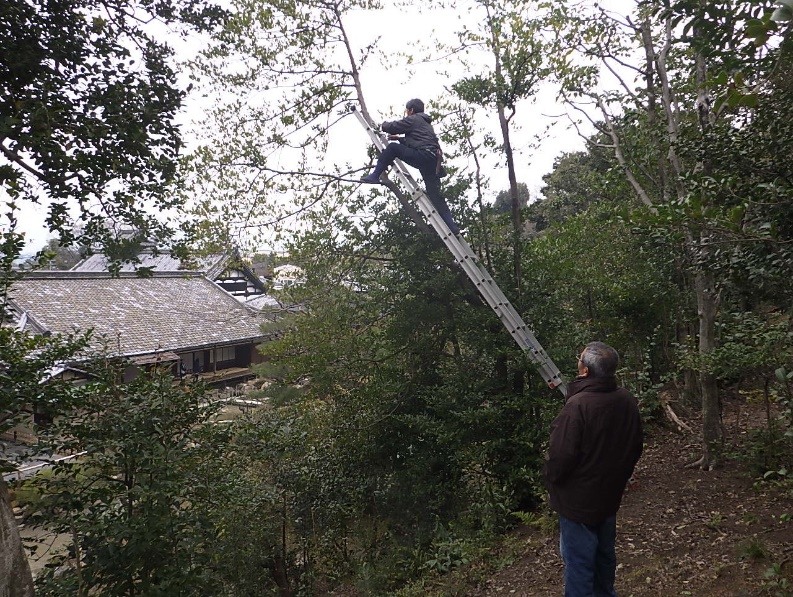 An overgrown large hedge of azalea was trimmed in steps. The height and shape of it were adjusted and new trees were planted while correcting the overall balance. 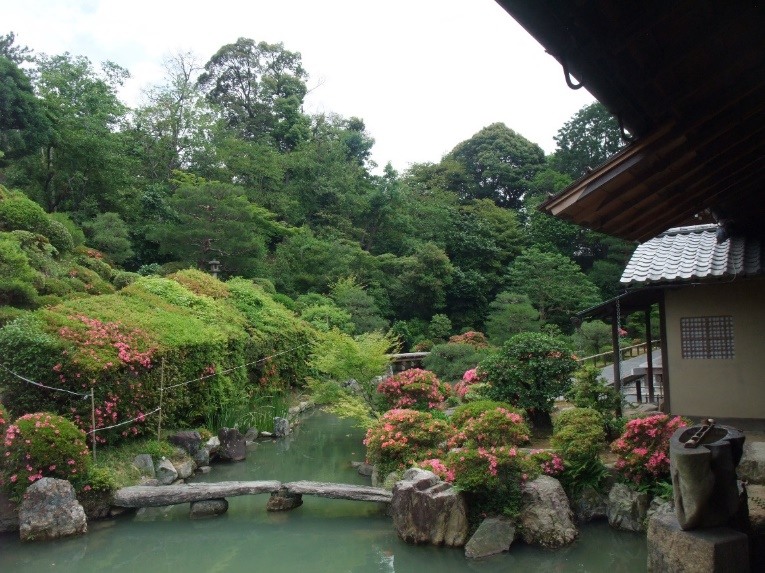 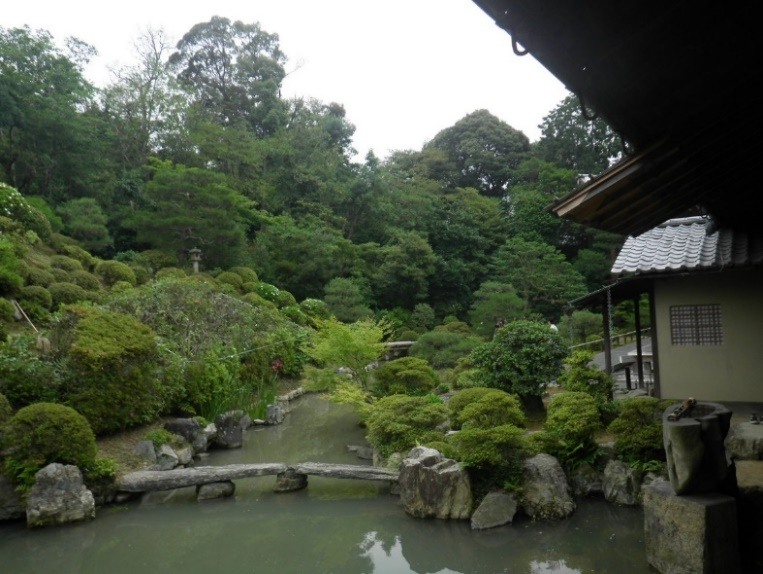 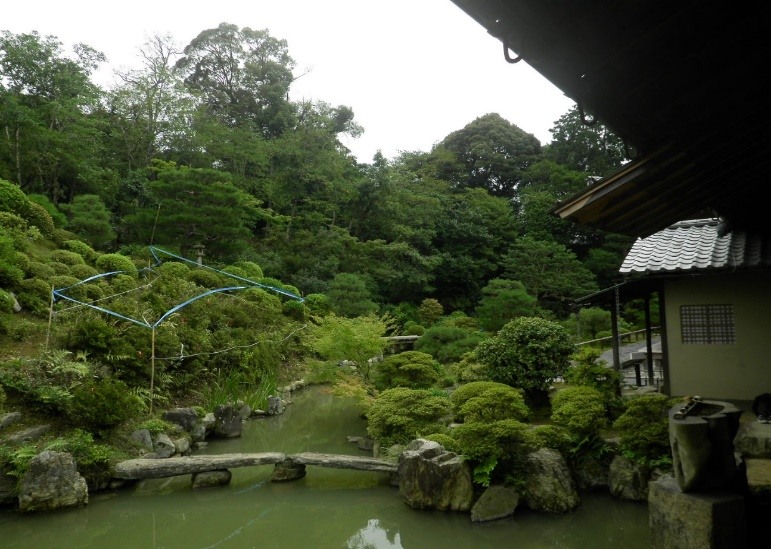 The shape was adjusted after the hedge grew back. 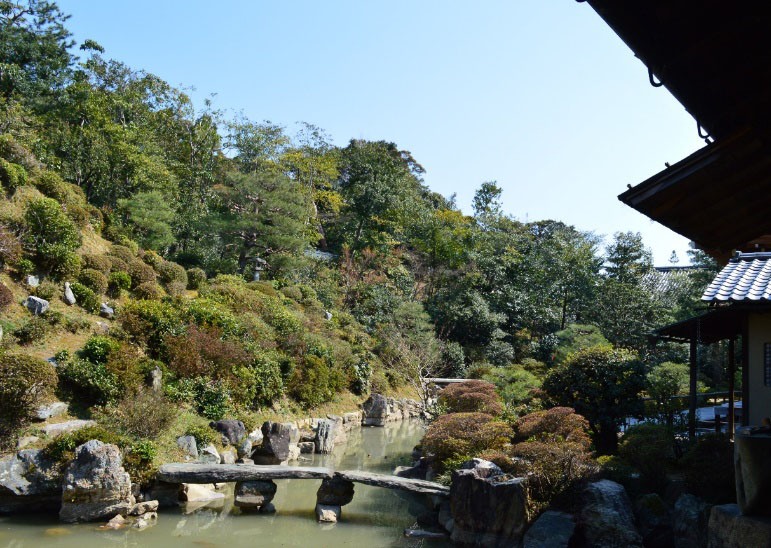 The hedge blends into the overall scenery.

In this way, restoration work on cultural properties is conducted, while both considering its original state and applying the latest techniques and knowledge available.

While analyzing the status quo and preserving the form of parts that cannot be deciphered, the craftsmen role it is to connect knowledge and experience to be passed on to future generations.