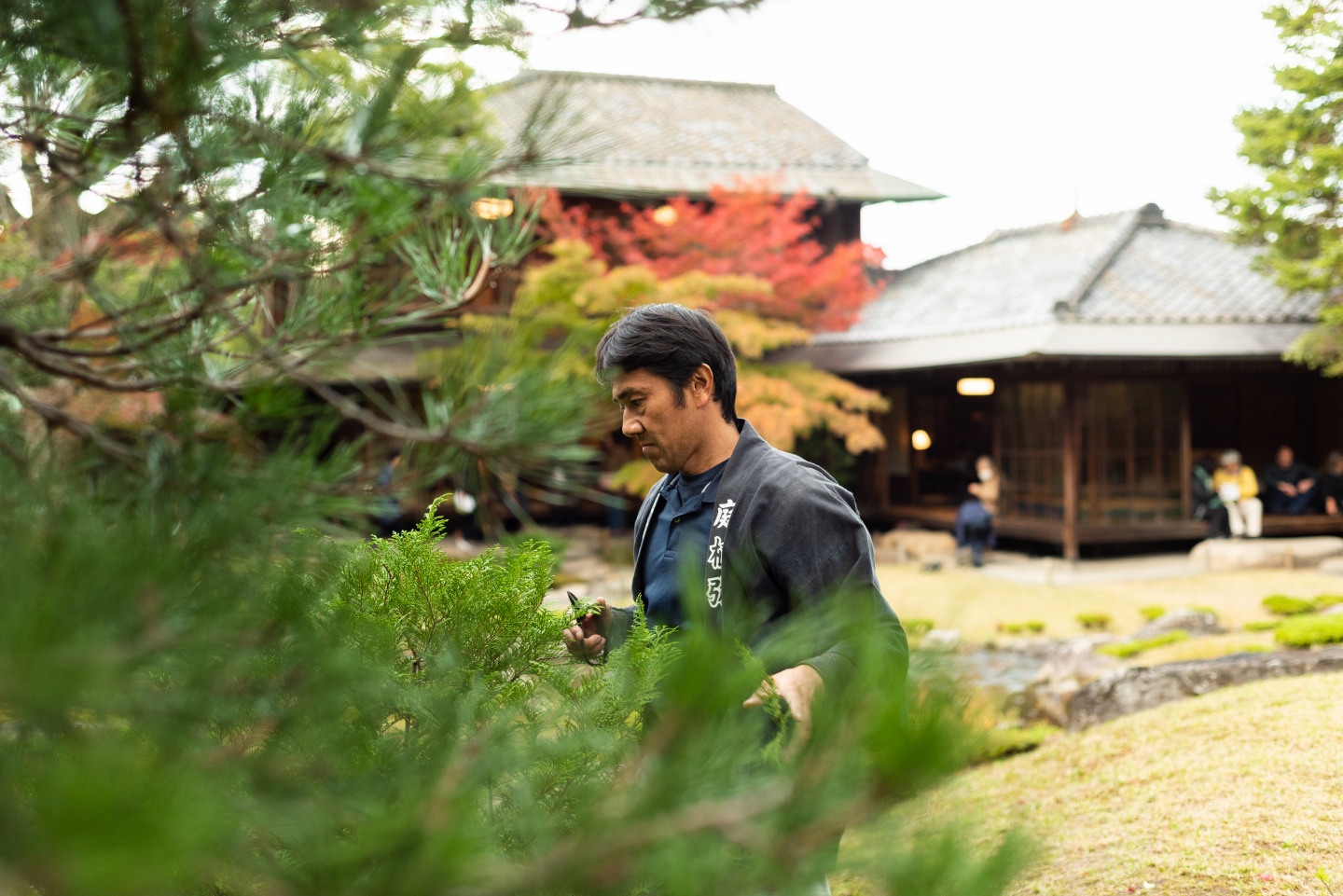 ――How long has it been since you started working in landscaping and gardening?

I started at 23, so it’s been 31 years. Before that too, I was helping out since around middle school or high school. When I was a college student too, I helped out during summer break, spring break, winter break. I did everything from general chores, office work, and weeding to working at Higashi Hongan-ji Temple and Shosei-en Garden.

――Why did you want to work in landscaping and gardening?

‘Cause it’s the family business. (laughs)

――As a child, were you aware that you’d take over the family business?

My dad used to take us kids to play at the worksite. So I’d be watching my dad and granddad and these master Japanese gardeners working. The way I was raised, that was normal, so I had no reservations about doing this work myself. But how to get your son to like the family business and take it over is a huge issue. I suppose my dad was also using his head.

Little by little, the friends I made back then have now built careers as Japanese gardeners and teachers, and so there’s a network there. My dad sure had foresight in that area.

――As a Japanese gardener, what do you strive for and what areas do you excel in?

I’m not sure if it’s the area I excel in, but I guess what I’ve carried on from my granddad’s and dad’s generations is “seriousness.” Approach your job seriously. Do beautiful work. No being careless. It’s the considerateness of making sure you’ve done every little thing that you can do for others.

To be an organization capable of doing that, you’ve got to communicate it to everybody. Maybe you could say I’ve got a fixed notion of what a Japanese gardener is supposed to be. But it’s about saying, “We are Japanese gardeners.”

This work is done by hand and so, sure enough, mistakes get made. I make them too. That’s why you always need to approach your job seriously to build relationships of trust, so that when that happens, you can communicate with the person in charge or with the owner. The people who were in charge when we were young are elder statesmen today. But sure enough, they still keep those impressions of us, even after all this time.

On the other hand, we’ve slowly been getting older too. And when we’re dealing with a younger person, they show us deference. For example, there might be a young designer from a company we partner with. At a time like that, you don’t force things on people. You really take in what they’re saying so that you’re creating together with the owner or with your partners. It’s about taking care not to spoil that.

Another thing is, this being the culture of a company we inherited from our dad, it’s only natural that there’s an “Ueyakato” level of work. As long as our gardeners protect that line, there’s a lot that we entrust them with, whether its garden creation or garden management. Among them, we’ve got veteran members and members who’ve joined us mid-career. My hope is that by all of them pushing each other to improve they can develop a new aesthetic sensitivity together. 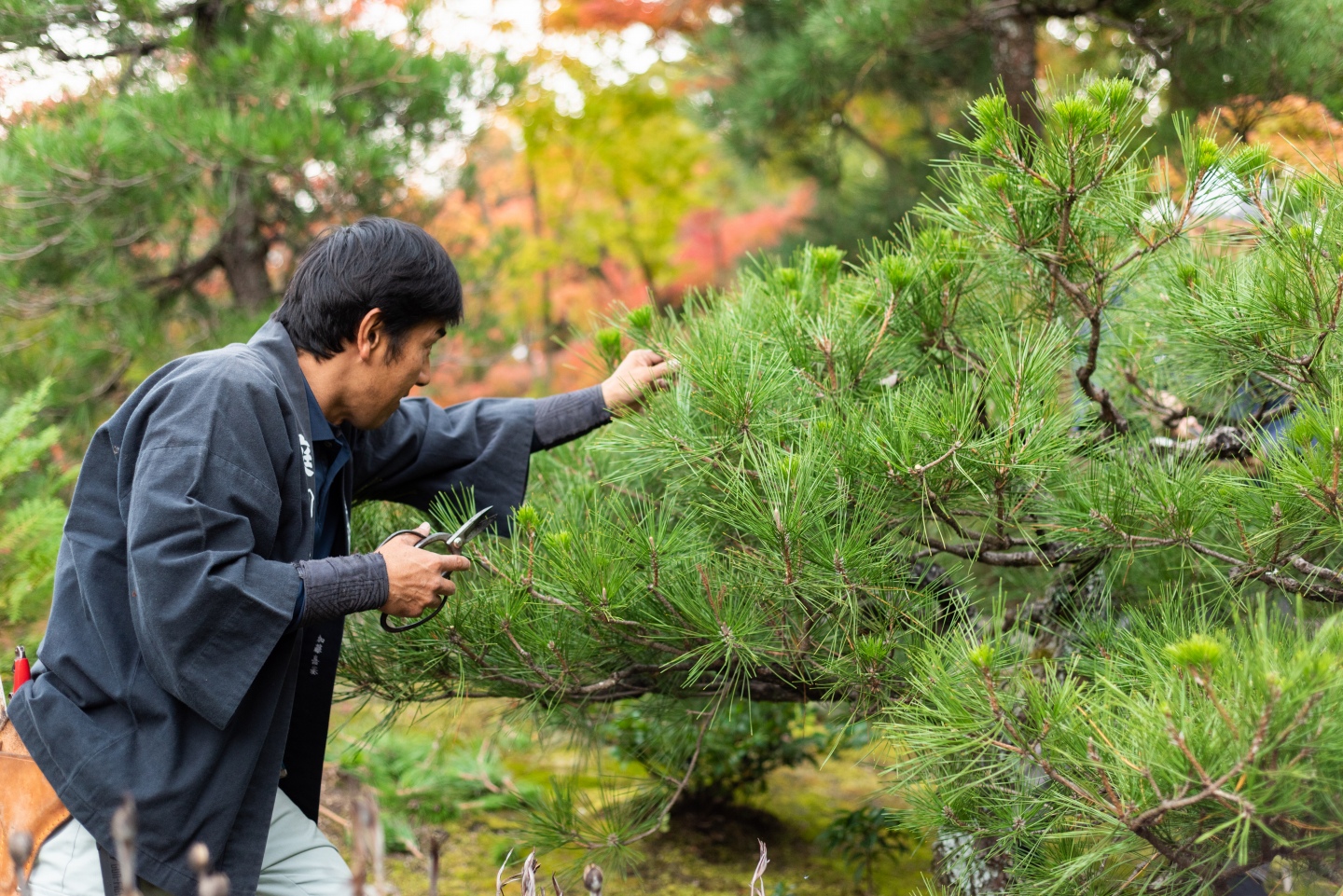 ――What’s the allure of landscaping work?

But if that’s what suits you and you like it, then this job is fun. You don’t have to wear a necktie, plus all the moving around is by car and there’s no dealing with crowds.

Another thing is that you get to express the technique you’ve acquired. And people can see that. The sunlight hits you, the rain rains...you get to work while enjoying the changes in things. There are things that change, like when the garden of a private residence gets destroyed, but the chances are good that a temple garden will be around for a long time.

And when I retire someday, I want to bring my grandkids and tell them, “Look, your granddad built this.”

――Japanese gardens can be enjoyed by people who like greenery and plants, and there are people overseas who see something artistic in them.

Yeah, for example, the plans and design drawings. What’s there is rocks and trees, of course, but it’s never ever the same, right?

No matter whether the materials we use are trees or stones, they’re never the same things. We do search around to see if there might be things that are “close,” but their numbers are limited too. That’s why the worksite requires lots of judgment and inspiration. Thinking about what’s going to look best...and sometimes the words and explanations come to you later.

――Do you have any goals or dreams ahead?

Hmm, dreams...How long can I keep doing this work? I’m already 53. My dad died at 67. Fourteen years left; think about it that way and the countdown has really begun. For the company, I think having someone like me at the top forever would be hard, so knowing when to step back is difficult.

――Being in your position, you’ve seen the full range of worksites. Do you like working at the worksite?

Yeah, I do. Sure I like it. The worksite suits me better than sitting at a computer. I really do want to be there all day, watching everyone work all day, and saying whatever needs to be said.

――What will be the role of Japanese gardens in our future society?

Hmm. I guess something like offering people some relief. Still, today Japanese gardens too have turned into “something you go see” or “someplace you go to enjoy,” and people don’t make too many of them themselves. It’s hard to conceive of constructing a large-scale public garden in the future.

But for example, Japan’s Grand Shrine of Ise (Ise Jingu) gets moved and rebuilt once every twenty years. In the end, without having rituals like that, the skills don’t get passed on. That’s why we do them. If someone’s lucky, they get to participate three times. First, you’re a novice, then a mainstay, and after that is when you’re a master. And that’s what’s important, right?

So that system...If you call “Japanese gardens” a culture that Japan takes pride in, then it seems to me we need to establish that system not just as a company, but as a whole society.

As for the company, we’re taking the things which, until now, even my dad was only taught orally and we’re recording them as images and data, and as legacy. It’s important to collect all that. And I’d also like to let people know more about the fun of this job. What I want to say is “Preserving greenery is fun and extremely important too,” and “Being a part of that and becoming able to do it yourself is really fun.”

――What kind of organization do you want Ueyakato Landscape to be?

We’ve still got a long way to go, but I’d like us to be an organization that aims to be what people in Japan call “model leaders” (shi). The kind of people that have both the public esteem and the skills to be called “model leaders” by those around them...I’d like to say that Ueyakato Landscape is a company of people aiming to be model leaders even as we stimulate each other’s work as colleagues.

How long it takes to become a garden master is something nobody knows, and it depends on the person. Even people who are living national treasures will tell you they’ve “still got a ways to go.” Our company has an elder trainer (oyakata) who for me is a master, but he doesn’t think so himself. ‘Cause he thinks there’s things he still can’t do.

But I’m also fond of the Japanese word uekiya (literally “garden planter” or “gardener”). Like when people in Japan say, “Go get the uekiya.” Because that word uekiya naturally includes things like cutting trees and making gardens. Sano Tōemon, a garden master to whom our company is indebted, has a saying he often uses. “Before there was a union of landscape architects, there was a league of uekiya. That’s what created the landscape architects’ union. And so, we are a league of uekiya.” And that’s what makes us uekiya. 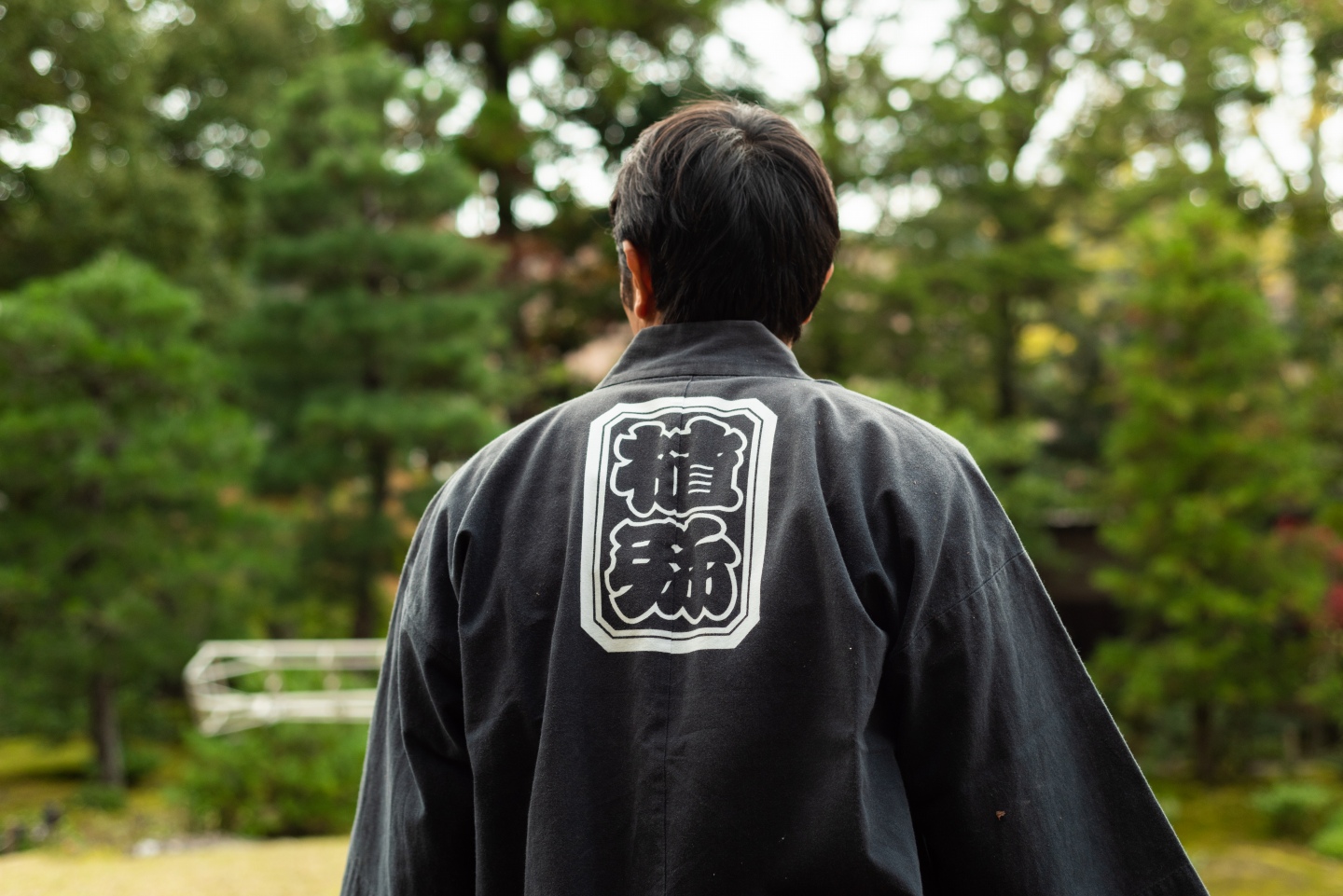